Are you one of the millions of Americans wondering why you pay so much money towards your student loan without making a chip in your balance? You are not alone. Through our own research and analysis of financial statements of Navient (formerly Sallie Mae) we can help explain the complicated mess that is the American Student Debt Crisis.

Here is the story of our happy student, John. Like so many people, due in large part to stagnant median incomes and skyrocketing tuition and living costs, John doesn’t have 30 to 150 thousand dollars lying around in the bank. John and his family know that he needs to go to college to increase his lifetime earning opportunity. This will allow him to buy more things while paying more taxes: benefiting the government and private industry simultaneously. So John goes to the government for a loan. They give him a lengthy document called a promissory note that spells out all the complicated terms. Those pages can be summarized in a quarter of a page. “Would you like to go to school? Sign here.”

John, elated, graduates university with only about $50,000 in debt. How much he actually paid for school is a mystery to him since he was already paying interest on the half of the loans which were unsubsidized. He is graciously given 6 months before being required to set up a payment plan. The six months fly by and John manages to find a job that allows him to have a little money left over from his $1500 rent to make payments. Sure he doesn’t have much spending money, and starting that business is out of the question, but he enters a payment plan that seems to work for him. He glances over the lengthy terms and is again given a simple option. “Would you like to pay this amount or default?” He chooses to pay. He hands over $200 a month and after a year lived frugally he decides to check his statement. “Did my balance actually go up? I thought my interest rate was only 5.6%”

What John doesn’t realize is that many payment plans have hidden clauses that allow loan servicers to add unpaid interest to your loan, then charge you interest on that.

Let’s break it down:

Interest on your student loan is capitalized daily. This calculation method has a negligible effect on the interest rate you signed up for but does allow collectors to make a tiny bit of extra money. Compounded monthly the interest on $50000 at 5.6% would be $233 for the first month. John’s payment of $200 doesn’t cover the interest. So his balance actually goes up and the $33 from the difference goes in a metaphorical pot. After so many months the balance has increased and the unpaid interest in the metaphorical pot has accumulated. At some point, depending on the loan and plan, all the unpaid interest in this pot is added to John’s balance. Naturally, the dollar amount of an interest only payment increases. Unaware and without a rapidly increasing salary John continues to pay $200. The gap between his payment and interest increases and so does the balance and amount of unpaid interest each month.

SO WHY ARE THEY DOUBLE CHARGING PEOPLE FOR INTEREST?

Because, for some reason, it is legal in SOME ways in SOME places.

SO WHAT CAN I DO?

There are several options. First let’s examine Navient, one of the most prominent loan owners and servicers.

NAVIENT used to be Sally Mae but was spun off to focus on federal and private student loans. Some loans are owned directly by Navient, and others are owned by the Department of Education and collected by Navient. The following numbers are pulled directly from Navient’s 2015 Annual Report and Proxy statements.

CEO Jack Remondi’s total compensation for the last 3 years is $17.35 million. He also owns 1.77 million shares. There are certainly higher paid CEOs but that is quite a bit of money for someone who is quoted as saying:

“Helping our customers navigate the path to financial success is everything we stand for.” 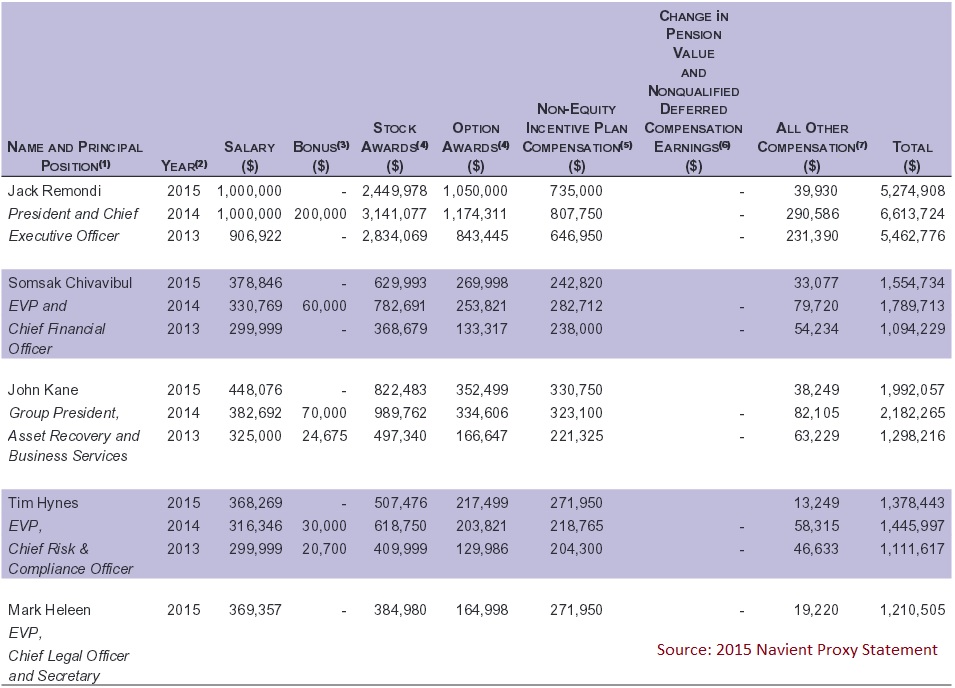 Now we have examined what the people in charge of the company make from the students of this great nation. You might guess the company is performing admirably. The results might surprise you.

“Servicing more than $300 billion in education loans, Navient supports the educational and economic achievements of more than 12 million customers” (Navient, 2016)

Direct loans owned by Navient total $122.9 billion with $96.5 billion of Federal Student Aid loans and $26.4 billion in private loans. These assets produced $1.66 billion in net interest revenue after related expenses and allowances for loan losses. This company that makes a habit of double charging people for interest only collected 1.35% on their loans. The company did also make $902 million from servicing and collection revenue, including $166 million in derivative betting. Navient’s bottom line net income for 2015 was $997 million dollars. At least they were in the black.

Navient owes $2.57 billion dollars in short term debt and a staggering $124.8 billion in long term borrowing. (We sincerely hope Navient’s creditors do not treat their balances the same way Navient treats their customers’.) They had $1.6 billion in cash and “cash equivalents” on hand at the end of 2015 to pay their expenses for the future. In 2015 their expenses added up to $962 million. If a significant number of their customers go on extended forbearances (which will be explained later) due to a severe economic event, even a $3 billion dollar decrease in front end revenue could mean disaster for the company due to solvency issues. This relatively likely scenario would probably trigger a government bailout.

SERIOUSLY, WHAT CAN WE DO?

Use All of Your Forbearances in Hopes the Economy Collapses

Let’s start with the worst idea. An economic forbearance is used when you cannot make the monthly payment on your loans. Every loan has a varying number of months you can use for the life of the loan. Some are three years. If you try to wait payment out until the next recession, chances are that companies responsible for overseeing loans will get bailed out. In a recession so bad that your balances get erased, they will be the least of your worries. In the meantime your balance would increase exponentially. Savvy, Inc. would not recommend this solution.

Every loan is different. Interest rates, terms, and payment plans vary by company, loan type, and date signed. Each company has a team ready to handle disputes and they are legally obligated to answer every single question you might have.

With so many complicated rules and calculation steps, mistakes are possible. If your balance is higher than you think it should be don’t hesitate to dispute the amount with your servicing company. Document every conversation and if you are not satisfied with the results you can file a complaint with the Department of Education’s Ombudsman Group

We contacted several representatives and received responses back from Barack Obama and Hillary Clinton. Secretary Clinton had comprehensive plans for dealing with the student loan crisis including an emergency halt to interest for distressed borrowers and a three year interest free period for entrepreneurs. Unfortunately, that is no longer relevant but every representative, senator, and President needs to hear about this issue until it is fixed.

Pay as Little as You Can Until the Loan is Forgiven

In most income based payment plans your loans are forgiven after 20 years of successful payments. If you have no intention of ever paying them in full you can simply pay as little as possible while watching your balance skyrocket. This will likely have a poor effect on your credit score.

Your mid-twenties and early thirties are a very special time. You might want to sacrifice any spending money you have during those years striving for a zero balance. If our friend from before, John, manages to negotiate his interest rate down to 0% (likely impossible) then he would be able to pay off his 50k balance in only 72 short months… if he pays $700 a month.

Hope for a Miracle: Government Forgiveness

Students need a bailout. For half of what the U.S. Government spends on the military IN ONE YEAR (source: http://www.defense.gov/News/Special-Reports/FY16-Budget) they could write a check for $300 billion to improve the lives of millions of taxpayers and money spenders. For even less than that the government could at least forgive the exorbitant amount of interest they have added to Department of Education owned loans and compensate companies who own other loans in exchange for elimination of these egregious pure profit increases.

Potential, current, and recent American students are in the worst debt position of any generation. Tuition is higher than ever, the job market is questionable at best, and income inequality threatens not only our discretionary income but capitalism itself. (Read “Love Thy Neighbor Capitalism™”) A college degree has become equivalent to a high school diploma and we must stop treating our students as a profit center.